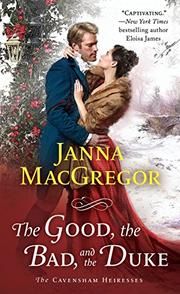 THE GOOD, THE BAD, AND THE DUKE

All a spinster wants for Christmas is a charming rake to call her own.

Paul Barstowe, the Duke of Southart, was a dissolute second son known for his disreputable behavior. The deaths of his father and elder brother days apart gave him the title and a new determination to change his ways. To start burnishing his reputation, he bids on a property where he hopes to establish a charity hospital, but temptation arrives in the form of heiress Lady Daphne Hallworth, the sister of Paul’s best friend–turned-enemy. Home Alone style, Daphne is abandoned in London by her family in their rush to depart for the Christmas holidays. She decides to get started investing her fortune and energies to found a charitable home for unwed mothers. Interest in the same property puts Paul and Daphne in close proximity, as does the loss of her reticule containing a journal in which she shared not only her family’s secrets, but some of her own, including a longing, since childhood, for the handsome Paul. Daphne’s trust in Paul to help her avoid scandal shocks him. As they become closer, “Something shifted within him. A crack opened up, allowing a want to crawl out from the depths of his soiled soul and emerge, shaking every manacle free.” MacGregor (The Luck of the Bride, 2018, etc.) weaves a compelling story redeeming Paul from rakish behavior depicted in previous installments of The Cavensham Heiresses. Paul works his way back into the good graces of his family and friends as Daphne discovers her independence and strength beyond the genteel, circumspect, and invisible good sister and good daughter she has always been. MacGregor’s prose is wordier and her plotting more leisurely than necessary, but Paul and Daphne are very appealing characters.

A rake is redeemed and a spinster unspun in a sweet historical romance.