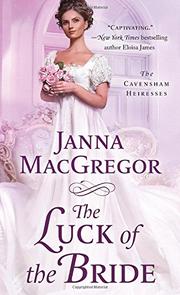 THE LUCK OF THE BRIDE

The marquess in charge of a young heiress’s dowry is terrible at accounting—and their problems only multiply when they fall in love in MacGregor's (The Bride Who Got Lucky, 2017, etc.) latest Cavensham Heiresses book.

March Lawson has served as the head of her household ever since her parents died eight years ago. She and her younger sisters are ready for their first season among the London ton, but the trustee of her bank account, Michael Cavensham, the Marquess of McCalpin, hasn’t responded to her requests for funds. Even March’s brother, the viscount, can’t help her, since he’s only 9 years old. When McCalpin catches March forging his signature to access her own money, he doesn’t have the heart to turn her in for embezzlement. Instead, he appoints himself as her guardian and whisks March and her sisters to London for the season of their dreams. Antiquated banking laws make for fine moments of tension as March and McCalpin try to reconcile their bank accounts and their growing attraction for one another. While March worries she won’t fit in with the rest of England’s social elite, McCalpin wonders how he’ll manage her estate when he can’t even manage his own. And every time they try putting their heads together to figure it out, they end up kissing! But vicious gossip, a jealous cousin, and even more bookkeeping drama keep them from solving all their problems too soon. Shocking developments will have even the smartest readers wondering if one plus one will ever equal two.

Math has never been sexier.