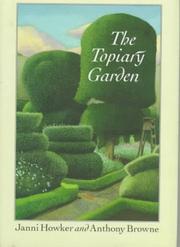 Stomping down the road, away from her all-male family in a rage, Liz meets ancient Sally Beck, who invites her into the local manor's topiary garden to hear how she once became a boy. Fleeing her own family, Sally donned her brother's clothes, changed her name to Jack, and found a job as a gardener's boy. Though forced to unmask after several years, she was allowed to stay on, becoming at last head gardener and living out her days surrounded by carefully trimmed, oddly shaped greenery. Liz finds both disturbed dreams and solace in Sally's tale: visions of horned figures and huge shears, but also, ultimately, a firmer sense of self as well. For a story about transformation, what better illustrator than Browne? His seven enigmatic paintings feature looming, massive topiary, in which an occasional female body is the only recognizable shape, and garden tools or shadows the only sign of habitation. This strange, subtle episode, originally published in Howker's Badger on the Barge and Other Stories (Greenwillow, 1984), stands on its own in this small, neat volume, printed in well proportioned but tiny type. Thoughtful readers shouldn't be bothered by the many Briticisms, but there's an appended glossary just in case. (Fiction. 12+)