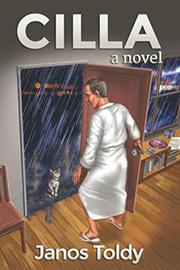 In Toldy’s debut novel, a California retiree’s life changes after he reluctantly takes in a stray cat.

Andrew Daniel “Andy” Flowers has been living alone in a one-bedroom apartment since his wife, Dorothy, died. When a neighbor tells the widower there’s a kitten at his door, he makes it clear that he’s not remotely interested. But when a storm blows in, he lets it in for the night. Andy wants to find someone else to take the cat; meanwhile, he buys it food, kitty litter, and a carrying case while repeatedly insisting it’s not his cat. He later blames the feline for his string of bad luck, including a minor multicar accident. Of course he grows fond of the female cat, naming her Cilla. Now feeling less alone, he may be ready for romance with Domino, a woman he’s recently met, without believing that he’s somehow betraying Dorothy. Toldy’s novel maintains a momentum befitting its protagonist—a retiree who’s rarely in a hurry. Readers will likely sympathize with Andy, who often reminisces about Dorothy and seemingly has only one true friend in Sam Dart, his former neighbor. The no-frills prose outlines sometimes-routine events, like trips to the pet store or vet. But endearing scenes of Andy grudgingly warming up to “the damned cat” provide feel-good entertainment. Andy’s interactions with humans, meanwhile, showcase his diminishing aloofness but typically prompt frequent discussions on everything from religion to political ideology. In the book’s penultimate chapter, the spotlight shifts to Jazz, a parking lot guard who, as a black woman, has endured discrimination. Although the story periodically shows Andy through others’ points of view, this prolonged focus on another character, even with a minor tie to the protagonist, is jarring. Nevertheless, all is tied up neatly at the end.

Leisurely paced but warmhearted tale of a widower and his feline inspiration.