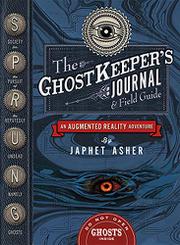 A talented young ghost hunter is missing, leaving behind clues to his fate in a collection of memos, field notes, reference material, and vintage photographs.

Informed that just opening the volume has released five ghosts, readers are urged to use their “ecto-sense” both to gather them back and to help track down rising star Agamemnon “Ag” White by following his trail through a series of case files and connecting documents. The quest is “augmented” by a free app. This adds tasks, sounds, and ominous messages when a mobile device’s camera is pointed at select pages as well as floating ectoplasmic blobs when it’s pointed around the room—these must be “captured” in order to unlock subsequent exploits. As readers tackle ghastly ghosts ranging from a jealous “Prismorph” that makes the Mona Lisa’s hair disappear to a “Toxigon” hanging out in an abandoned nuclear reactor, a storyline gradually emerges. This involves the orphaned Ag’s family—and the possibility that someone in the cast is actually hosting a fiendishly clever ghoul. Charts, drawings, faintly odd old photos, and cryptic symbols add to the spectral atmosphere. Although the interactive VR features are tricky enough to frustrate novice gamers, they work seamlessly after sufficient practice to lend additional chills to a decidedly eerie climax. Even knowing the consequences, newly fledged ghost hunters will be tempted to flip back to the beginning.

An ectoplasmic extravaganza, both on the page…and Beyond.