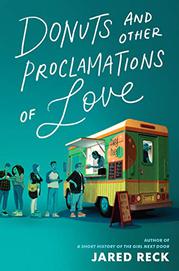 DONUTS AND OTHER PROCLAMATIONS OF LOVE

Oscar learns that life is a lot more complicated than frying donuts thanks to an unlikely romance, confronting the past, and dealing with heartache.

Desperate to be done with school in Gettysburg, Pennsylvania, Oscar is a determined senior with plans to one day operate the family’s Swedish food truck business and maybe even open his own cafe. When presented with an unusual opportunity to use his culinary skills to help prevent cafeteria food waste, he forms an unlikely friendship with academic all-star Lou. Though he resists at first, she becomes an integral part of Oscar’s life both in school and on the truck. The main characters are complex and well drawn, especially the wise and irresistible Farfar, Oscar’s Swedish paternal grandfather. Swedish-born Oscar has lived with Farfar since the age of 4, arriving in America after his father died; his mother had already left the family by then. Reck handles a grandfather-grandson conversation about condoms and consent with a deft hand, although the book contains mainly just PG–rated kissing scenes. He also addresses contemporary social justice activism, substance abuse, and Farfar’s coming-out story. Told in Oscar’s first-person voice, the plot drags a little, but a romance resolved and a moving show of support from friends-turned-family compensate. The inclusion of Swedish cultural elements is refreshing and adds interest. Most of the cast is presumed White.