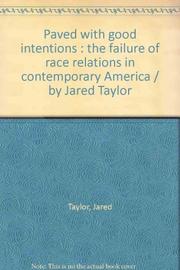 The Failure of Race Relations in Contemporary America

A stinging, but ultimately one-dimensional, polemic that calls for dismantling race-conscious government, educational, and business policies that, in this conservative's view, worsen the white-black relations they sought to better. Americans have engaged in a vast conspiracy of silence about black-white relations, Taylor (Shadows of the Rising Sun, 1983—not reviewed) suggests. Blacks, he believes, have been done a grave disservice by liberal apologists who meekly accept the idea that whites are responsible for blacks' problems. At its most powerful, Taylor's presentation is filled with example after example of the paternalism, condescension, and hypocrisy fostered by affirmative action in education and employment and by black double-standards in spouting antiwhite rhetoric while decrying white racism (e.g., the Bill Clinton-Sister Souljah flap). But while admitting that ``no one could argue that America is free of racism,'' Taylor never discusses cases of racism, perhaps in keeping with his apparent feeling that blacks should be denied any excuse for misbehavior. On the other hand, in blasting the media for inflaming tensions with its coverage of the Howard Beach, Bensonhurst, and Rodney King incidents, the author dwells on circumstances that seem to extenuate white misconduct. He indulges in increasingly bizarre extrapolations of his thesis (e.g., objecting to the idea that businesses that market products and services to blacks perpetuate race consciousness) or in rhetoric befitting campaign clichÇs (``the sturdy virtues of the men and women who founded this country and make it great''). Finally, Taylor supports mandatory use of Norplant contraceptives by welfare mothers—an Orwellian experiment in sexual control in highly ironic contrast to his often eloquent denunciation of American's doublespeak on race. In the end, Taylor resembles a physician who uses the most sophisticated equipment to diagnose a patient's condition—and then prescribes bloodletting as the cure.