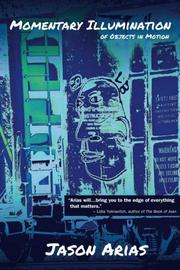 MOMENTARY ILLUMINATION OF OBJECTS IN MOTION

Most of the tales in this collection focus on brief incidents, like an EMT, new on the job, watching police deal with a deer struck by his ambulance or a kid trying to run home after getting caught stealing beer. Arias makes a strong impression with his stories, many of which have been previously published in journals and magazines. The time elapsed in a tale might be less than an hour, but he expertly reveals something particular about his characters and hints at something universal. This is obvious from the first story, “Deer Don’t Scream, Do They?” The inexperienced EMT is standing by the side of the road with a couple of cops and the ambulance driver as a deer lies dying on the road. If the animal were a person, the EMT would be helping the injured party. But he can’t, and neither, apparently, can the rookie cop, who makes a mess of trying to put the deer down. In the end, no matter what they do, they all have to move on to the next moment, the next sufferer. Some of the tales are gritty like that one, while others are more esoteric, such as “The Case for Viable Life in Atlantis,” which sets out opening and closing arguments and exhibits to prove that people should be able to breathe underwater. The central metaphor here gets a bit cloudy. Arias’ work is much more striking when he grounds it in more visceral events, no matter how strange the subject matter. In “Closer,” a man who recently lost his wife to illness finds himself drawn to crowds and contact and doesn’t break down to properly mourn until he is rejected after an awkward bathroom encounter. In “Writing Code,” a nerdy kid tries to come out of his shell by hanging mistletoe from trees and overhead wires on the route his crush walks to school. The author sets up the story from a “his and hers” perspective, which not only gives readers a look inside both characters, but also provides a heartbreaking twist.

Tales that are emotional and intellectual but almost always moving; a superb collection.