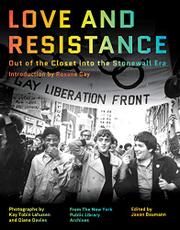 Out of the Closet into the Stonewall Era

A pictorial time capsule from the pivotal days of a budding gay rights movement.

Baumann, coordinator of the New York Public Library’s LGBT Initiative, presents a dramatic collection of images, drawn from the career archives of photo-documentarians Lahusen and Davies, charting the rise of grassroots gay activism from the mid-1960s to the mid-'70s. It was a time when LGBT activists took to the streets of New York, Washington, D.C., Philadelphia, and New Jersey to creatively and defiantly demonstrate against intolerance and inequality and whose “vision and courage changed our world.” Lahusen was active in early lesbian solidarity organizations while Davies was best known for chronicling the feminist, peace, and social justice activism movements of the era. Their photographs, accompanied by Baumann’s commentary and descriptions, represent separate perspectives within a unified theme of LGBT equality throughout each of the book’s four sections. “Visibility” displays images of a wide variety of gays and lesbians in the primes of their careers and endeavors; “Love” celebrates the power of community and affection in the face of societal hate; “Pride” memorializes the sacred queer spaces where activism, collaboration, and solidarity flourished; and “Protest” demarcates the demonstrations and rebellion against rampant gay oppression. Iconic activists like Marsha P. Johnson, Sylvia Rivera, Barbara Gittings, and Ernestine Eckstein share space with gay writers, artists, performers, and media founders. Haunting and arresting, the photos illustrate a historic American era when same-sex affection was forbidden in public and considered both a mental illness and an atrocity. A literary celebration commemorating the 50-year anniversary of the epic Stonewall riots, the book is elegiac yet also provides a reflective and hopeful reminder for future generations that change and promise can arise from struggle and sacrifice. Though the book is a reflection of a different age and struggle, it is also timely given that LGBT freedoms remain ever endangered within the current political climate.