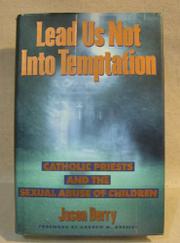 LEAD US NOT INTO TEMPTATION

Catholic Priests and the Sexual Abuse of Children

Berry, a New Orleans journalist, tips over a religious rock and finds a nest of corruption, deceit, and despair. Despite a hyperventilating foreword by Andrew Greeley (``perhaps the most serious crisis Catholicism has faced since the Reformation''), this proves to be a temperate, detailed investigation of a religious tragedy: pedophilia among Roman Catholic priests. According to the statistics given here, perhaps two percent of them lust after children; what shocks is that any man devoted to pastoral care would act on such impulses, and that local Church authorities sometimes covered up the evidence. Berry (a Catholic) discovered the scandal in 1984, when rumors began to spread about Gilbert Gauthe, a priest in Cajun country, Louisiana. In gritty, novelistic fashion (``A dread feeling lodged in Roy's intestines. `What the hell. Did he suck people off?' ''), Berry tracks the Gauthe case and his own sense of outrage. An angry attorney confronts Catholic bishops, who turn turtle; media outlets run away from the story; Berry hunts down experts on sexual deviation; more pedophilia cases emerge. One encouraging note sounds as Berry meets Michael Peterson, a benign, street-wise priest who runs a center for dysfunctional priests; sadly, Peterson later dies of AIDS. As the investigation proceeds, broader sexual issues emerge. Why are there so many homosexual priests? Where does priestly celibacy fit in? Here, Berry switches from reporter to crusader, launching an attack against Church views on sexuality that becomes a blast against Catholic traditionalism (``a medieval church turning its back on the church of the space age''). Looking at floundering seminaries, depressed parishes, and corruption in Newfoundland, Chicago, and N.Y.C. (where one priest, a tenured professor at CUNY, makes amateur porno films), Berry concludes that the Church is a ``dysfunctional family'' and argues for optional priestly celibacy. Despite the ``old church vs. new church'' political brief: superb investigative reporting.