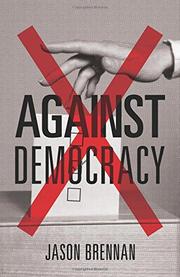 A brash, well-argued diatribe against the democratic system.

There is much to mull over in this brazen stab at the American electoral process by Bleeding Heart Libertarians blogger Brennan (Strategy, Economics, Ethics, and Public Policy/McDonough School of Business, Georgetown Univ.; Political Philosophy: An Introduction, 2016, etc.). The problem with most voters, according to the author, is that they are “ignorant, irrational, misinformed nationalists”—not because they are dumb, mind you, but because political engagement is not worth the effort. Brennan divides citizens into three groups: the hobbits, who are apathetic and have no opinion; the hooligans, the majority, who have strong, fixed views and learn about other views only to support their own; and the vulcans, the rare few who “think scientifically and rationally about politics” and try to be unbiased—i.e., well-educated people like Brennan and his readers. Since political liberties—e.g., the right to vote and hold offices and positions of political power—are not like other (civil) liberties, the author asks “why it’s legitimate” to allow hooligans, for the most part, to “impose incompetently made decisions on innocent people.” As he argues, voters should be chosen and culled as carefully as jurors are selected, such as by an exam or lottery. Already foreseeing readers’ objections to what he calls an epistocracy, or rule by the knowledgeable, Brennan attempts to systematically destroy the objections—for example, that his proposed system would delegate civil duty even more unequally among demographic groups than it already does. Moreover, “restricted suffrage” smacks of past and current voter restrictions, such as against minority and poor voters. However, Brennan makes the compelling argument that politics as currently practiced make us “situational enemies.”

Sure to cause howls of disagreement, but in the current toxic partisan climate, Brennan’s polemic is as worth weighing as any other.