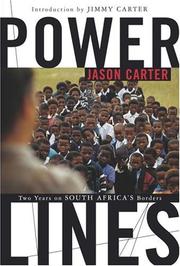 Thirteen-year-old Jason Carter accompanied his grandfather on a humanitarian mission to Africa in 1988 and returned with vivid, contradictory images: one of idyllic landscapes, another of children his own age pressed into military service. One of them asked whether he knew Michael Jordan: “I was shocked,” Carter writes. “Perhaps, I thought, the gap between Africa and America is not so huge as I guessed.” Fast-forward a decade, and Carter, now a young Peace Corps volunteer assigned to the northern townships of South Africa, discovers that gap to be huge indeed, at least for blacks, even under Nelson Mandela’s government. On the scene during a time of transition when that government was diligently seeking to remake itself to serve the hitherto disenfranchised majority, Carter offers a firsthand look at life in the townships, ranging from notes on matters of daily existence to larger commentaries on matters of freedom and justice. His narrative is in the main informative, though peppered with gee-whiz enthusiasms (“Hitchhiking is one of the most liberating experiences I can imagine”) and liberal posturing (“Now that we were able to point fingers at other oppressors, we were ready to hold high the banner of justice”). Carter is at his best when he lets others do the talking, as the time a weary government minister tells him that the most surprising thing he learned about taking power was that “we just had no idea how much we had to do,” or when a passer-by in a local shop comments on his globalizing mission: “Yours is the best way to colonize a people. Americans at least give you something in return.”

A book particularly suited for those contemplating a hitch in the Peace Corps themselves.