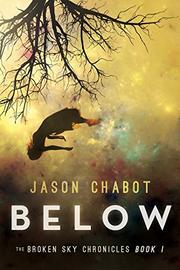 Hokk scavenges the dead bodies falling from the sky, but when he finds one alive, everything changes.

An unusual twist on the post-apocalyptic theme finds humanity split into two races. Above, on the floating islands, dark-skinned humans live separated by class and surrounded by mythology. Below, the pale-skinned people crowd into the burned-out cities or try to survive in the vast wastelands. Other than the occasional dead body or trinket dropped from above, the two civilizations have no contact. That’s until Hokk, serving out a sentence of exile in the wastelands, finds Elia, who has miraculously survived her plummet from her island home. Charged with the safekeeping of a mysterious box, Elia is desperate to return to her island. Hokk has other plans. The third-person narration switches focus between the two, giving readers insight into their thoughts and motivations. Hokk’s duplicity and amorality make him an unsympathetic hero. Elia is similarly hampered by her frustrating naiveté. Worldbuilding inconsistencies abound. Below, grasses grow without sunlight, and the agrarian civilization Above exists without rain; a telescope is proclaimed “a miracle” in a society with working elevators. Still, although it meanders at times, the novel eventually finds its way to a satisfying conclusion and setup for Volume 2.

Though flawed, this first volume in a new trilogy has much to offer genre enthusiasts.