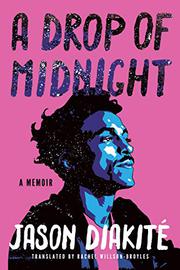 A DROP OF MIDNIGHT

A memoir from a Swedish hip-hop artist with a multiracial background.

In his debut, Diakité looks at themes such as race, manhood, family ties, and rootlessness with an unusual stance and fresh, sometimes-striking voice. His writing has an ethereal, questioning quality, in sync with his background as the son of an African American man and a white American woman who moved to Sweden and then divorced. “I was never American, never Swedish, never white but never black either,” he writes. “I was a no-man’s-land in the world. I have a complex system of roots that branches across continents, ethnicities, classes, colors, and eras….Must I have just one origin?” Both parents are portrayed as complex, with mixed feelings about their experiences. As his mother notes, “to experience the same ignorance, the same fear, the same hate, in Sweden, weighed heavy on us.” Diakité captures the cruelty of childhood peers alongside his dawning perceptions regarding race, and he reflects on the cultural awakening that led him to success as a rapper in Sweden. “You might call Reagan the godfather of gangster rap,” he writes. “Under his rule was born the music made of hard drums and urgent voices.” The two primary narrative threads are his travels to the U.S., in an attempt to weigh his personal history against a larger story of racial marginalization, and his tenuous relationship with his father. Accompanied by a filmmaker friend, he visited places including rural South Carolina, Harlem, New Orleans, Baltimore, and tourist-oriented slave plantations (and one acknowledging the black perspective). Everywhere he grimly observes hidden narratives of the long-term mistreatment of black communities, tied to the original sin of slavery: “Real people—my forefathers—were whipped, tortured, herded, and sold like livestock.” Diakité explores family history that reflects much African American experience, including Jim Crow, Harlem in its prime, and the embrace of Afrocentrism in the 1960s. While his storytelling is occasionally heavy-handed or repetitive, the author’s prose is often nimble and observant, sharply considering the burdens surrounding race and masculinity.