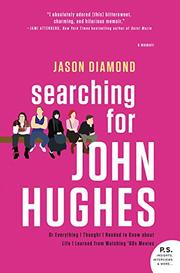 A Brooklyn-based writer and editor’s memoir about how watching John Hughes films as an adolescent gave meaning to his troubled life.

Rolling Stone sports editor Diamond grew up a member of the Jewish minority in suburban Chicago. For the first few years of his life, his mother and his candy manufacturer father lived an American dream that included “two cars [and]…a house…built with the money made from rotting the teeth of children who could only afford to spend a quarter on snacks.” His life changed dramatically after his parents divorced. By the time he was 7, he had attended four different schools and become “the weird kid [whom] nobody knew.” It was then that a babysitter introduced him to Hughes’ Pretty in Pink, which immediately became his favorite film for the comfort it gave him that even kids who were different could “still be cool.” As Diamond grew older and began watching more of Hughes’ movies, he found that they helped him to make sense of things like the social divisions in high school, where “everyone had his or her place, just like in a Hughes movie.” But then his mother, who could not cope with their rocky, adversarial relationship, moved away and left her son to fend for himself. Clinically depressed, homeless, and often drunk or high, Diamond turned even more to Hughes’ feel-good films to help him make sense of an unforgiving world. He then moved to New York, where he decided that he would write the director’s biography. After spending most of his 20s bouncing between Chicago and New York, often unhappy and endlessly revising a book he would never publish, his life finally came together. Both funny and heartbreaking, Diamond’s memoir is not just an account of how one director’s films impacted—and perhaps saved—his life. It is also a memorable reflection on what it means to let go of the past and grow up.

A quirkily intelligent memoir of finding oneself in movies.