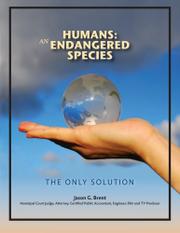 A bleak, provocative portrait of the difficult choices to be made if humanity is to survive.

Brent is quite convincing in his argument that we’re heading toward “the perfect storm” of global ecological crises. Population growth exacerbates the rising level of consumption and shrinking resources, especially with respect to fossil fuels, which paints a new, stark reality highlighted by climate change, pollution, scarcity of potable water and food shortages. The author predicts that this critical situation will lead to armed conflicts between nations; thus, he asserts, “The choice is between resource wars with weapons of mass destruction and coercive population control.” For the most part, Brent writes in an accessible style, offering multiple examples or illustrations whereby readers can easily digest the large amount of statistics and mathematical projections. However, many readers may believe that there’s a way to convey the urgency of the matter without resorting to a hostile, confrontational tone. In fact, readers might then feel more engaged and less browbeaten. Most likely, inflammatory references to “parasites” or “religious fanatics who produce the most children and spread like a cancer over the face of the earth” will alienate even those who support some of Brent’s more palatable recommendations, such as increased access to proven methods of birth control. In the end, Brent advocates a global “One-Child-Per-Family law,” along with execution of parents (and their second child) who disobey; naturally occurring multiple births (twins, triplets, etc.) would represent an exception to the rule. This scenario raises a myriad of questions: Who will take care of the first child, now orphaned? Will those with a genetic predisposition toward multiple births be privileged or oppressed? Will homosexuality become a more socially desirable trait? Without addressing these particular consequences, he unequivocally states: “Each individual will have a very clear choice—execution or birth control or sterilization or abortion or abstinence.”

Certain to stir the debate surrounding reproduction and environmental sustainability.