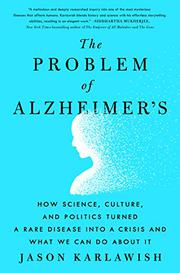 THE PROBLEM OF ALZHEIMER'S

How Science, Culture, and Politics Turned a Rare Disease Into a Crisis and What We Can Do About It

A professor of medicine at the University of Pennsylvania delivers a lucid, opinionated history of the science, politics, and care involved in the fight against this century’s most problematic disease.

The first symptom of Alzheimer’s is usually difficulty with memory, often recognized by a spouse, friend, or caregiver. Over years, memory deteriorates, and victims can no longer perform simple tasks such as paying bills or taking medicine. As the disease worsens, they become apathetic or delusional; lose the ability to dress, feed, and clean themselves; become bedridden and depressed; and often die from complications. Caring for an affected spouse or parent is a crushing experience, often bankrupting all but the wealthy because medical insurance and Medicare pay for medicine and doctor visits but not “custodial care,” which is estimated at as many as 170 hours per month. As Karlawish shows, Alzheimer’s usually causes more suffering for the caregiver than the patient. Until the 1970s, most doctors explained that this was “senility,” a consequence of aging beyond the scope of medical science. Eventually, researchers realized they were dealing with an epidemic of brain disease. At the same time, patient advocacy groups formed to lobby Congress, which was amenable to providing funding. Formerly, doctors diagnosed Alzheimer’s by examining the brain after death. Observing and testing living patients was a major advance. In 2012, the FDA approved an ingenious brain scan that illuminates the areas damaged by Alzheimer’s. Sadly, Medicare won’t pay for the $3,000 test, which doesn’t directly help patients because no good treatment exists (several drugs purport to slow its progress, but many experts believe they’re worthless). A medical expert with a page-turning style, Karlawish is mostly successful in conveying optimism. Hopeful drugs are in the research pipeline, but even better news is that physicians, institutions, and advocacy organizations are adopting more imaginative and humane programs to care for victims both before and after their disease becomes crippling.

An outstanding primer that readers should put into the hands of their doctors.