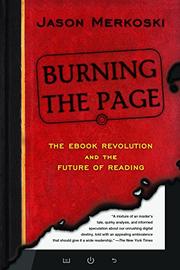 The Ebook Revolution and the Future of Reading

Merkoski, one of the leading members of the team that developed and launched Amazon's Kindle and the e-book revolution, shares his views on “the future of reading, communication, and human culture.”

The author compares the development of e-readers to Gutenberg's invention of the printing press 500 years ago. Just as the Gutenberg Bible laid the basis for mass distribution of books and the spread of literacy, Merkoski dreams of the creation of pocket devices that can contain the contents of entire public libraries. “Reading has not only been transformed,” he writes, “but also rebooted.” The author attributes Amazon's initial success as a market leader to its ability to create “an easy, seamless customer experience,” as well as its marketing expertise and its pre-existing customer base. Crediting iPads with greater sensual appeal and Kindle with quicker access, in his opinion, the two greatest inventions of the 21st century so far have been Apple's iPhone and Amazon's Kindle. What's lacking is the ability for complex indexing using links. It is Kindle's connection to the cloud that will allow it to become mainstream, writes Merkoski, who foresees a tipping point looming when e-book readers will overtake the printed book and social networking will be directly incorporated into the reading experience. This will allow ongoing collaborative revisions by readers and the original author. Looking further to the future, Merkoski imagines that “linear line-by-line reading” may become “a quaint pastime like butter churning or horseback riding.” It could be replaced by holographic projections and other visuals. Further into the future, the author imagines the possibility of mind-to-mind direct communication, “some sort of high-speed plug that goes into an author's head, some way of taking an author’s imagination and converting it directly into a digital format.” Although he is no longer connected with Amazon, Merkoski does not discuss the current disputes among publishers, Amazon and Apple.

A provocative book that will appeal mostly to futurologists, techies and devoted readers, many of whom will not share Merkoski's love of technology but will find the book interesting nonetheless.