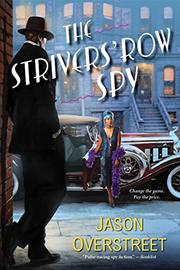 During the days of the Harlem Renaissance, the nascent FBI’s first African-American agent gets a daunting and dangerous assignment.

At Middlebury College’s 1919 graduation ceremony, the imposing James Gladforth recruits Sidney Temple into the recently formed Bureau of Investigation even before the young man has received his diploma. J. Edgar Hoover himself interviews Sidney in the Capitol building. His first assignment is a provocative one: to monitor the activities of firebrand orator Marcus Garvey and his opposition to W.E.B. DuBois and his organization, the NAACP. Sidney has the additional tricky task of convincing his wife, Loretta, to move from West Philadelphia to Washington while keeping his new assignment a secret. There’s another surprise when the case takes them to the heart of Harlem. Neophyte Sidney is the ideal first-person guide for the reader, introducing many significant figures from the era, like poet James Weldon Johnson, Adam Clayton Powell, and Max Eastman, who edits the Liberator, a provocative magazine. The complex conflict between DuBois and Garvey turns in no small part on Garvey’s view as a Jamaican that the Negro will never be a full participant in American society. Sidney catches a lucky break when he earns Garvey’s trust by pursuing a would-be assailant. At the same time, he suspects that someone powerful and covert is controlling these events.

Overstreet’s debut novel could use a little more pace and a little less embellishment, but he successfully immerses the reader in a fascinating and little understood era in the nation’s history.