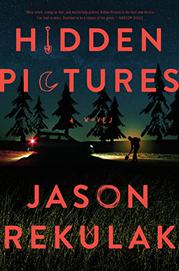 by Jason Rekulak ; illustrated by Will Staehle & Doogie Horner

A disturbing household secret has far-reaching consequences in this dark, unusual ghost story.

Mallory Quinn, fresh out of rehab and recovering from a recent tragedy, has taken a job as a nanny for an affluent couple living in the upscale suburb of Spring Brook, New Jersey, when a series of strange events start to make her (and her employers) question her own sanity. Teddy, the precocious and shy 5-year-old boy she's charged with watching, seems to be haunted by a ghost who channels his body to draw pictures that are far too complex and well formed for such a young child. At first, these drawings are rather typical: rabbits, hot air balloons, trees. But then the illustrations take a dark turn, showcasing the details of a gruesome murder; the inclusion of the drawings, which start out as stick figures and grow increasingly more disturbing and sophisticated, brings the reader right into the story. With the help of an attractive young gardener and a psychic neighbor and using only the drawings as clues, Mallory must solve the mystery of the house's grizzly past before it's too late. Rekulak does a great job with character development: Mallory, who narrates in the first person, has an engaging voice; the Maxwells' slightly overbearing parenting style and passive-aggressive quips feel very familiar; and Teddy is so three-dimensional that he sometimes feels like a real child.

It's almost enough to make a person believe in ghosts.