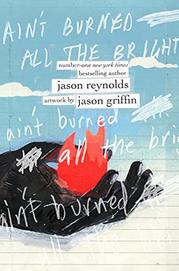 AIN'T BURNED ALL THE BRIGHT

A profound visual testimony to how much changed while we all had to stay inside and how much—painfully, mournfully—stayed the same.

Reynolds’ poetry and Griffin’s art perform a captivating dance on pages of mixed-media collage and emotive reflection on the pronounced threats facing a contemporary Black family. In “Breath One,” the opening of the verse narrative, the unnamed boy protagonist struggles with the onslaught of TV news coverage of the systemic violence and death experienced by Black people—coverage that is both overwhelming and insufficient. The television then forms the backdrop of the narrator’s concerns for his bedridden father, who is struggling with an acute respiratory illness while isolated in a bedroom. The art is sometimes spare and monochrome before shifting to a bright and striking palette as Griffin deploys aesthetics that enliven the rich flow and rhythm of Reynolds’ words. The two skillfully go back and forth like rap duos of old, each with a distinct voice that enriches the other. The result is an effective critique of the ways we’ve failed as a society to care for one another. By “Breath Three,” however, a complicated optimism shines through for a family that perseveres through closeness and connection despite what is broadcast from their TV. While grounded in 2020, many of the issues touched on explicitly are very much not over and not even new, making this remarkable work both timely and timeless.

Artful, cathartic, and most needed.