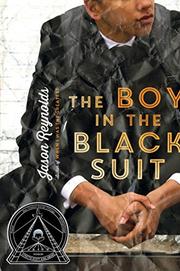 THE BOY IN THE BLACK SUIT

With his mother newly dead, a job in a funeral home somehow becomes the perfect way for Matthew to deal with his crushing grief.

Initially skeptical, he plans to use his early-release senior year program to work at a fried-chicken joint that’s staffed by an entrancing girl with whom he eventually develops a gentle, tenderly depicted relationship. But the funerals intrigue him and then become deeply satisfying; Matthew finds solace in seeing others experiencing his pain. Matthew’s neighbor, Mr. Ray, the funeral director with a sad back story, becomes almost a surrogate father when Matthew’s dad gets drunk and then has an accident. Matthew’s voice is authentic and perceptive as he navigates the initial months without his mom; he’s supported by a believable cast of fully fleshed-out characters. Occasionally, his language waxes poetic, as when he describes the sights and sounds of Brooklyn: “our cement world of trash cans blown into the street, stray cats begging, stoop sitters dressed in fresh sneakers smoking blunts in broad daylight, old ladies sweeping the sidewalk, tired nine-to-fivers walking slowly on the final stretch before home.” Reynolds writes with a gritty realism that beautifully captures the challenges—and rewards—of growing up in the inner city.

A vivid, satisfying and ultimately upbeat tale of grief, redemption and grace.