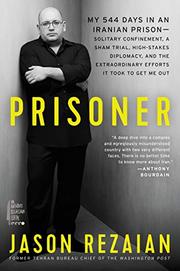 My 544 Days in an Iranian Prison—Solitary Confinement, a Sham Trial, High-Stakes Diplomacy, and the Extraordinary Efforts It Took to Get Me Out

Washington Post opinion writer and CNN contributor Rezaian recounts his 544 days of imprisonment at the hands of the Iranian regime.

A native of Iran whose family had immigrated to the United States decades earlier, the author moved to Tehran to head the Washington Post bureau there. It was a good gig, well paid in dollars, while, because his wife was an Iranian citizen, they were allowed to pay in local currency. “Life was good,” he writes. Although he favored local-color stories, often about food, and guided Anthony Bourdain through the city for an episode of Parts Unknown (this book is published under Bourdain’s imprint), he still managed to fall afoul of the secret police. The charge eventually cooked up for him was definitively Orwellian: “As a member of the American press writing what could only be perceived as neutral stories about Iran, I was attempting to soften American public opinion toward the Islamic Republic”—a softening that would allow American values to circulate within the country. After developing strategies to avoid despair while in solitary confinement (“if you’re lucky you learn to quiet your mind, just a little, and live softly”), Rezaian could do little more than wait it out even as Iranian agents threatened to add time to his sentence because his mother was publicly protesting his imprisonment. “Why is your mother coordinating with the BBC to ruin your life?” asked one. The author credits a concerted campaign on the part of Post editor Martin Baron, his brother, and other intermediaries for his release after having been “the plaything of some of the nastiest authoritarian ideologues to roam the earth in many decades.” Rezaian also allows that one of his captors got at least one thing right: He correctly predicted the outcome of the 2016 election in the U.S., saying, “Trump is the candidate that hates Muslims most."

Of interest to students of the Iranian system as well as free-press advocates.