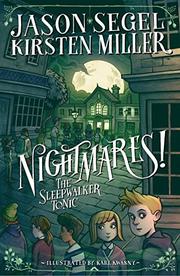 From the Nightmares! series, volume 2

Charlie Laird faces a dire threat to the Netherworld and the Waking World.

Having conquered his fears of the Netherworld (Nightmares!, 2014), Charlie has little to worry about besides a summer job and his growing attraction to his best girl friend, Paige. But things in Cypress Creek never stay quiet for long. A mysterious tonic is making residents in the next town over, Orville Falls, walk the Earth like mindless zombies. The solution lies somewhere between the Waking World and the Netherworld, and Charlie, his stepmother, and his little brother, Jack, set out to solve the problem. The authors dutifully shine a light on some of the murky waters left over from the series opener, and this book’s big villain is introduced in a nifty way. Unfortunately the main threat of the novel is a bit of a bust. The zombielike creatures just aren't a very interesting threat. These books are so concerned with the internal lives of its characters that an opponent that has nothing going on emotionally falls flat. Readers will be far more involved with Charlie and Jack's sibling rivalry or Charlie's growing fondness for his stepmother than the zombie element, which is a bit of a drag by comparison. Still, the story finishes strong, wrapping up the central mystery with a smart resolution and supplying a great tease for the next installment. This second installment may be doing little more than killing time, but at least it kills time effectively.

A solid-enough sequel that slips here and there but leaves readers’ goodwill intact.