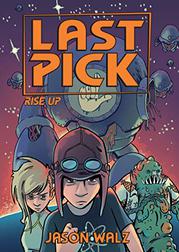 From the Last Pick series, volume 3

In this trilogy closer, a group of teens fights their final battle against intergalactic foes.

Picking up where Born To Run (2019) left off with its nail-biting cliffhanger, siblings Samantha and Wyatt Erickson are trying to find each other across vast galaxies. Sam and girlfriend Mia escape from an interstellar prison while Wyatt and friend Adiva fly across the cosmos to save them. Sam believes her parents are alive and presumes to have found the prison where inmates are forced to fight in an alien civil war. The maliciously evil extraterrestrial known as the Sheriff, now sick with a mutating virus, is in close pursuit of the Ericksons. As the tension ratchets up with a ferocious intensity, they face off for the ultimate battle, which both profoundly thrills and devastates with its bittersweet conclusion. Walz’s series has been consistently fantastic, with its inclusive worldbuilding and electrifying pacing coupled with dazzling, cinematically styled art. Throughout the series, the characters have explored what it means to be labeled “useless,” affirming the intrinsic value of those considered lesser for being different by small-minded bigots (in this case, virulent, war-hungry aliens). The team that saves the day encompasses a broad spectrum of identities: Sam, neurodiverse Wyatt, and Harper, Wyatt’s Deaf girlfriend, present White; Mia is cued as Latinx; and Adiva is a brown-skinned, hijabi Muslim girl from the U.S. South.

An affecting and unforgettable SF series with heart.