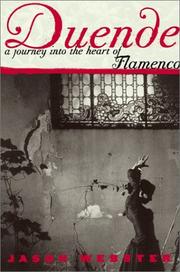 A Journey into the Heart of Flamenco

Can an American-born Englishman with blond hair go to Spain and find fulfillment as a flamenco guitar player?

That’s one of the questions posed by debut author Webster, and the predictable answer is that it may take immersion in a “flamenco lifestyle” that includes the assimilation of some Andalusian gypsy lingo, philosophy, mannerisms, and, perforce, months of association with the likes of car thieves and drug dealers. For good (or ill) measure, throw in a hit-and-run affair with an older woman, wife of the man who is charitable enough to employ you, thus funding your guitar lessons. There is no clock running in this hazy memoir, but it seems that in an amazingly short time Webster becomes proficient enough to sit in as an accompanist with a loose troupe of flamenco singers and dancers who are, by his own sad estimation, “good enough to play for tourists.” He exists nightly in the lower realm of this company, since creeping paranoia (perhaps enhanced by cocaine) convinces him that his blond locks make him an unwitting tourist attraction within a tourist attraction. One wonders, at least briefly, how this could happen to someone so inspired by the concept of duende, the elusive, transitory, sometimes orgasmic state that occurs when flamenco performers get grooved and surpass themselves. To his credit, Webster eventually discovers that duende can sometimes happen offstage, in a glance or an expression or the barrel of a gun, as well as in the ear of the beholder, and he finally reasons that without 20 years of practice and the genius he lacks he won’t be able to produce it on a flamenco guitar. But, perhaps . . . as a storyteller? Bad news there, too: Webster’s readers may find that they share the fate of a local gypsy whose tattoo proclaims: “Born to suffer.”