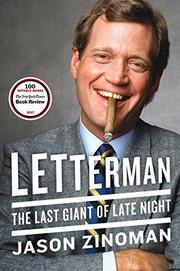 The Last Giant of Late Night

The tale of a tormented TV star and his legacy.

This is a critical biography, not in the sense of being negative (although there are parts that Letterman won’t like, since he doesn’t seem to like much), but as a work of criticism that focuses on the inner workings of a TV career rather than any life away from show business. “Years before the term ‘Generation X’ moved into circulation, David Letterman made ironic detachment seem like the most sensible way to approach the world,” writes New York Times comedy critic Zinoman (Shock Value: How a Few Eccentric Outsiders Gave Us Nightmares, Conquered Hollywood, and Invented Modern Horror, 2011) in this sharp, revealing biography. Such an attitude would establish him as a generational spokesman during an era of political apathy. Yet Letterman was more obsessed than detached, a “spectacularly committed hypochondriac,” a self-lacerating critic of his own show, and a performer who had to be pushed out of his comfort zone for his paradigm-shifting innovations. Though he played his eccentricities and insecurities for laughs, they were no laughing matter for the staff that was crucial in the development of his comedic dynamic, the writers who so often found themselves isolated (or occasionally berated) by the boss they were trying so desperately to please. The most significant of these collaborators was Merrill Markoe, his partner and foil from his early stint on daytime TV, who, “as much as anyone…helped invent the aesthetic of David Letterman.” Most of the rest were men, frequently from Harvard, and the boys’ club atmosphere became more of a problem as Letterman’s sexual relations with female interns became public. Zinoman’s analysis is often refreshingly counterintuitive: Letterman was a good interviewer. He recast and renewed himself during the writers’ strike. He didn’t fail as Oscar host. He was even more miserable as the winner of the late-night ratings war than he had been as the underdog.

This incisive, illuminating book shows the personal toll that success took on all responsible, the price paid for laughs.