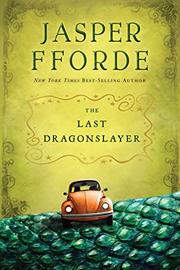 From the Chronicles of Kazam series, volume 1

Finally, the first in Fforde’s fantasy trilogy for young readers, published in the U.K. in 2010, makes it to this side of the pond.

In the Ununited Kingdoms (whose names and political inclinations presumably hold more meaning than their United counterparts), (nearly) 16-year-old foundling Jennifer Strange (think indentured servant with pluck) has taken over running Kazam, one of the last Houses of Enchantment. She shepherds once-powerful wizards through pizza delivery and rewiring homes in Hereford, a kingdom bordering the last Dragonland. When the last dragon’s death is foretold, Jennifer finds herself smack in the center of political maneuvering and foundering in massive tides of greed. Jennifer never comes across as adolescent or real; instead, her knowledge of her world and her even-toned narrative (even of high-intensity scenes) seem downright authorial. Too much of the novel is comprised of comic bits strung together with first-person exposition, and laughs fall flat when they depend on British slang, as with know-it-all William of Anorak. The obvious and clearly broadcast message (“Greed is all powerful; greed conquers all,” tempered by Jennifer’s innate goodness) further impedes the effect of the broad, sometimes ingenious humor. The second volume may fare better as it promises to highlight the aging, odd wizards and world rather than the less-than-sparkling Jennifer.

Mostly for Fforde’s fans, although fantasy readers with a taste for the silly should appreciate the subverted tropes.