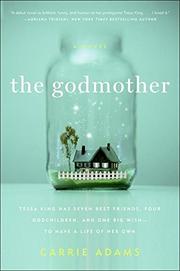 A perky debut considers whether a Londoner’s life of drinking, clubbing and one-night stands is more enviable than her friends’ bumpy marriages and parenting woes.

Tessa King is single, blonde, gorgeous and popular, although finding dates is getting harder as she doesn’t “do married men.” Her group of friends is important to her, and she is godmother to most of their children, including Francesca’s 16-year-old son Caspar, whom she tries to discourage from his flirtation with drugs. Then there’s privileged Helen, who still needs propping up in her struggles with her new-born twins, post-natal depression and a jerk of a husband; and Billy, whose ex-partner is being dishonest about child support. One of Tessa’s oldest friends is Ben (now married to Sasha), whom she’s known since they were teenagers. Ben doesn’t have children but Tessa wishes he did, and with her, except that she is fond of Sasha too and has no wish to break up their happy marriage. Instead, Tessa turns to a new admirer, James King, until she learns he has a wife and two children. When Helen and her husband are killed in a car accident, Tessa has to fight Helen’s unpleasant mother over custody of the twins and is forced to confront her own role in her friends’ lives. She confesses her feelings to Ben and he declares his love for her too, but eventually Tessa does the right thing and turns him down. Having found a good home for the twins, she resumes her life of work and godmothering—and maybe getting back together with James, who turns out to be separated after all.