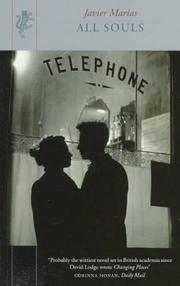 The first US appearance of an accomplished and elegant novel, first published in Spain in 1990, by the author of A Heart So White (p. 18) and other highly praised fiction. Set in Oxford, and drenched in the ambience of academic myopia and departmental power politics, it recounts in polished Jamesian prose the two-year lectureship enjoyed and endured there by its narrator, a visiting Spanish scholar. He encounters an alluring married woman tutor whose affair with him piques her conscience rather less than it does his. She, in fact, can't even be bothered to keep silent about their intimacy. Other complications are provided by a richly observed bevy of colleagues who exhibit most of the commoner academic and British eccentricities (notable among them are an economist who will discourse at length about his obsession with an 18th-century cider tax, and a professor of literature who moonlights as a successful author of ``horror blockbusters''). There's little plot beyond the (unnamed) narrator's romantic intriguing, but it's a rare civilized pleasure to overhear his incisive analyses of cultural, temperamental, and sexual differences between Britons and Iberians, or to follow his peregrinations through the meaner streets of Oxford (whose beggars elicit a feeling of kinship in this deracinated wanderer) or several antiquarian bookstores, ever in search of the odd and engaging. The novel is as much a record of life at Oxford as it is a narrative. Its characters, though vividly drawn, are really little more than functional, especially as measured against Mar°as's only real character creation here: his thoughtful protagonist, whose confusions and insights alike more often than not sparkle with the brilliance of aphorism (``In Oxford the only thing anyone is truly interested in is money, followed some way behind by information, which can always be useful as a means of acquiring money'')—translated with deadpan clarity and precision by the ever-dependable Costa. Another stunning work from one of Europe's best younger writers.