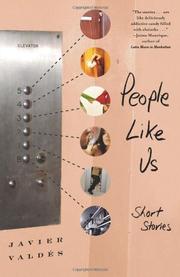 The publicity claim that Valdés, a former Mexico City dentist, penned short stories while waiting for patients’ anesthesia to take effect may explain these relentlessly numbing tales. The language (or translation?) is plodding and cliché-riddled and the stories are pulp dressed as allegory. In the overlong title story, two writers, the narrator Javier and his girlfriend, Ana Laura, rent a century-old house in the mountains. In the attic, Ana Laura discovers drawings indicating that there is a hidden cellar beneath the kitchen. Prodded by disturbing identical dreams, the couple access the cellar through an outside well. In an underground chamber, they discover the desiccated corpses of the original owner, Bernabeu, and his wife. There’s also a treasure cache, which the narrator must kill for. Moral? Corruption is its own reward. In “Neighbors,” the strongest of the six, the virtuous Lotzano family, including daughters Purísima and Virgen and son Fidel, buy a condo not knowing that Mephistopheles lives upstairs in the persons of con-man Señor Casquivan, his rakish and drug-dealing sons, siren daughter and slutty mistress. With nary a Faustian struggle, the Lotzanos succumb. Devil’s bargains are not for amateurs. Call girl “Cornelia” is recruited by client Federico to cure his brother’s alcoholism. Since Federico acts out of selfless, if misguided, motives, his comeuppance at the end seems unfair. The motto of “Beat me to Death” is “live by the sword, die by”—krate, switchblades, pistols. “Flidia” is kidnapped by Tornillo, who can’t decide if he wants to get back at her for ignoring him at parties or for being the best lover she ever had. The closing innocuous vignette about rigorous pre-date screening in a crazed Catholic family’s parlor is a welcome relief.