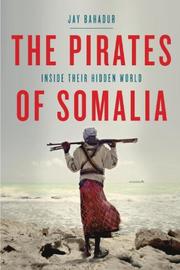 THE PIRATES OF SOMALIA

Inside Their Hidden World

A Toronto-based journalist debuts with a rare inside look at the pirates preying on tourist and commercial ships off the coast of Somalia.

Present-day piracy in the region began two decades ago, writes Bahadur, at the onset of a civil war in the impoverished, Muslim state of Somalia. At first, coast dwellers—rebel groups, militias and warlords—extorted “fines” from foreign fishing vessels that had devastated the lobster population. When such vessels armed themselves, the pirates began attacking commercial fishing fleets. By 2009, the buccaneers won world attention with hijackings of three vessels: a Ukrainian transport ship with a cargo of tanks; a Saudi supertanker carrying $100 million in crude oil; and the American cargo vessel Maersk Alabama, an incident that ended with action by Navy SEAL snipers. Winning entrance to pirate enclaves through the son of Abdirahman Farole, president of the autonomous region of Puntland, the author spent six weeks conducting interviews. Traveling with bodyguards and sharing a supply of khat, a popular drug, Bahadur talked with pirate leaders, officials and former hostages. “We’re not murderers,” said Abdullahi Abshir, who has hijacked more than 25 ships. “We’ve never killed anyone, we just attack ships.” Another pirate explained how he turned piracy into a business by introducing investors, guidance technology and motherships from which pirates operate deep into the Indian Ocean. Bahadur captures the private lives of the pirates as well as their increasingly organized and sophisticated ways. A 2010 hijacking garnered a $9.5 million ransom for an oil tanker. Attacks now occur over such a huge ocean area that the multinational naval task forces patrolling off the 1,000-mile Somali coast remain “unable to stop a motley assortment of brigands armed with aging assault rifles.” A nicely crafted, revealing report.