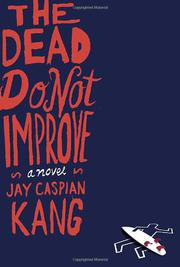 THE DEAD DO NOT IMPROVE

A Pynchon-esque menagerie of California surfers, cops, thugs and dot-com workers converge in a comic anti-noir.

In his debut novel, Kang, a journalist and editor at the online magazine Grantland, does some serious musing on gentrification and racism (particularly toward Asians), but the storyline and overall tone are satirical. Set in present-day San Francisco, the story runs on two alternating tracks, following two lead characters toward an inevitable confrontation. Philip Kim is a recent MFA graduate who's stuck working on a website counseling recently dumped men, and Sid Finch is a homicide cop who, between surf breaks at Ocean Beach, is investigating the murder of Dolores, a neighbor of Philip’s. Connecting the two is an organization called Being Abundance, a hyper-PC group of activists targeting the city’s leading online pornographer and online culture in general. Kang sends up the Bay Area's moralizing atmosphere along with its inherent weirdness, but he also parlays the setup into some surprisingly affecting observations: Philip’s budding relationship with a gorgeous neighbor sparks incisive passages on San Francisco’s tense mix of races and cultures, and he has plenty of insights on hip-hop, social media and Cho Seung-Hui, the Virginia Tech mass murderer. Finch, in turn, gives the story a hard-boiled, Hammett-esque feel, with sharp takes of the city’s smut culture and surfer dudes. (San Francisco retro-rock musician and surfer Chris Isaak has a brief, funny cameo.) The structure of this novel is loose to the point of near-collapse—at times it feels like it’s held together with Simpsons references and easy digs at West Coast liberals, while the closing pages satirize thriller climaxes in particular and narrative arcs in general. But Kang mostly earns the right to his metafictional games, capturing the sense of disconnection of a young minority in the city.

Smart, funny and eager to fly its freak flag.