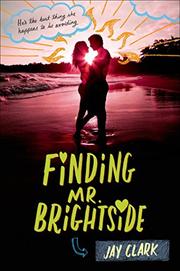 Two teens embark on a romantic relationship in the wake of their parents' deaths.

Even though they live across the street from each other, Abram and Juliette have never been close. But their parents were, particularly Abram's dad and Juliette's mom. The pair indulged in an affair that ended with a bloody car wreck and two broken homes. Months later, the teens are still coping in the best ways they can, but an unexpected encounter at the local CVS and the ensuing romance jump-starts their recoveries. It's a high-concept premise that the author fumbles by leaning on frequent false starts in lieu of actual drama. Just when the heat's about to kick in, something happens to derail the young couple's journey, an effect that will surely infuriate readers that just want these two kids to get together already. This is, after all, a tale of star-crossed lovers that actually has the temerity to name the female lead Juliette, and these sorts of stories come with certain expectations. Unfortunately, all the drama here is internal, as there are no external forces keeping these kids apart. Abram's mom is a stereotypical supportive suburbanite. She fares better than Juliette's father, who might as well be a ghost. Neither of these characters says or does anything that affects the narrative, nor does anyone else but the two leads.