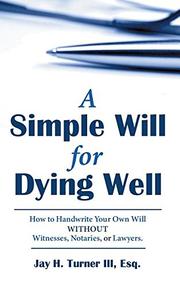 A SIMPLE WILL FOR DYING WELL

How to Handwrite Your Own Will Without Witnesses, Notaries, or Lawyers

Planning on dying? We all should, and this handy primer provides guidelines for properly writing a will.

In this debut, Turner, an estate attorney, warns of the problems that crop up when one dies without a last will and testament; for example, state law could give the house that you lived in with your current spouse to your children from a former marriage. He advises writing a so-called “holographic will”; it’s a legal term, not for a shimmery, 3-D image but for a will that’s written out entirely by hand. Because it can be authenticated by comparing it to handwriting samples, it doesn’t usually need witnesses or lawyerly vetting, making it the least expensive option for people with modest, uncomplicated fortunes (in the 26 states that allow it). Turner shows how to craft a will that does what one wants while also avoiding the ambiguities and pitfalls that can tie an estate up in court. He covers the basics along with advanced topics, such as how to list bequests of tangible belongings so that there’s no squabbling over who gets what; how to specify a guardian for children or prevent an 18-year-old from blowing his inheritance; how to deal with the possibility that your spouse could die with you in a car crash; how to provide for a pet; and how to bequeath your gun collection without getting your executor arrested for illegal firearms transfers. Turner deals with these niceties and others in concise, no-nonsense prose; for example, he notes that specifying funeral arrangements in a will is a bad idea because “By the time someone locates your will and the executor takes the necessary steps to start acting on behalf of your estate, you will be long buried.” He also provides checklists, model clauses, and complete sample wills; these cover a multitude of contingencies from the bare-bones “Tangible list, spouse, adult children” case to a convoluted “Divorced, Tangible List, Specific Bequests, Residence Sold, Residue to Charity” case. The clear advice and specific language will give readers confidence in drafting their own wills.

A useful, reader-friendly guide to one of life’s most daunting chores.