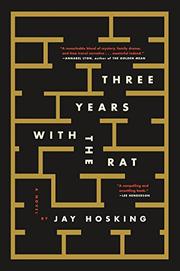 THREE YEARS WITH THE RAT

Hosking’s assured debut, a heady mixture of relationship drama and sci-fi time-travel thriller, features a fascinating character at its center: Grace, a brilliant, erratic, obsessively driven science student who has suddenly and inexplicably vanished. Our narrator and guide through the resulting narrative tangle, Grace’s younger brother, suffers in comparison to his charismatic sister. A diffident underachiever, he’s largely a passive figure in his own story, tagging along in the wake of his elder sibling’s worldly social circle, until his investigation of Grace’s disappearance uncovers her devastating secret—and the shocking actions of her unassuming genius boyfriend, John, who has rashly meddled with the secret mechanics of the universe itself for his own dark purpose. Structured anachronistically, Hosking’s time-looping tale deftly teases the reader with well-deployed reveals and intrigues with elegantly limned science-fiction ideas (including the brain-hurting concept of “subjective time” and spooky otherworldly “hunters” set upon those who temporally trespass). Hosking’s prose is limpid and tonally sophisticated; he’s a graceful wordsmith as well as a cerebral idea man. One may wish for more of Grace’s defiant, complicated voice—a version of the story from her point of view might have yielded more surprises and richer rewards—but Hosking's novel satisfies as both speculative fiction and character study.

A potent, sophisticated combination of science-fiction novel and psychological thriller.