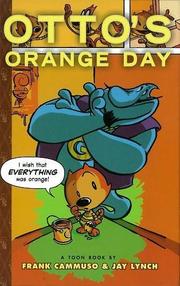 Young Otto loves orange so much that when a sly genie rises up out of an old lamp he receives from Aunt Sally Lee, he uses his one wish to turn all the world that color. His ensuing bliss changes to blues, though, after he gets a gander at his orange lunch and then sees what happens on the street when every traffic light is the same color. Cammuso illustrates comics veteran Lynch’s tale in neatly drawn sequential panels, casting Otto as a cat (marmalade, of course) in human dress and pairing him with a blue, distinctly Disneyesque genie. Discovering that said genie hasn’t eaten in 880 years, Otto cleverly calls on the persuasive power of pizza to reverse the wish, and by the end all’s well. Low on violence and high on production values, this comics-format “Toon Book” will leave emergent readers wishing for more. (Early reader. 5-7)