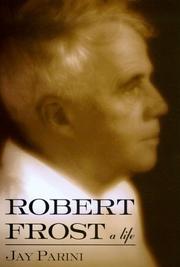 Parini, a poet (House of Days, 1998), biographer (John Steinbeck, 1995), and novelist (Benjamin’s Crossing, 1998), delivers a sensitive life of Frost that highlights the poet’s struggle to find light and stability in an existence filled with darkness and chaos. In old age, Frost was as full of honors as of years, a literary lion who received four Pulitzers and innumerable honorary degrees and recited his poetry at John Kennedy’s inauguration. The triumph was all the more striking in that Frost had battled against modernist tendencies in poetry, collectivist tendencies in politics, and his own fears of madness. Parini does not depart radically from the contours of Frost’s life outlined in Laurence Thompson’s groundbreaking, Pulitzer Prize—winning work, including discussions of his alcoholic father, years of uncertainty as a farmer, the poetic breakthrough he achieved in his two years in England, and his sorrow and self-reproach over the death of his wife. But he offers a corrective to Thompson’s underlying animus toward his subject (a dislike probably exacerbated by the competition of Frost and Thompson for the poet’s secretary, Kay Morrison). He shows that Frost was frequently afflicted by depression (as were his father, sister, and two children who committed suicide), but that he remained a caring if difficult husband and father, a charming if cantankerous friend, and a lively if unconventional teacher. Parini sees each poem as a victory over depression, anxiety, fear, and sloth. He is particularly good at tracing how Frost was influenced by Emerson, William James, Swedenborg, and Yeats; in demonstrating Frost’s achievement in writing poetry that would adhere to the bones of human speech; and in arguing that his seemingly simple verse masked a classical education that rivaled that of Eliot and Pound. For the 125th anniversary of the poet’s birth, here is neither hagiography nor pathography. Parini’s life magnificently details how Frost, through fortitude and lifelong dedication to craft, sought to heed his own advice to be whole again beyond confusion. (16 pages b&w photos, not seen) (Author tour)