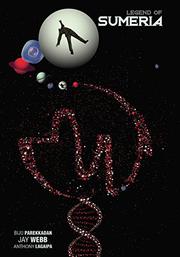 In Webb and Parekkadan’s debut graphic novel, a near-future civilization is in danger of collapse due to bioterrorism and a miracle drug that may no longer be effective.

Stem cell biologist Bruce Abbott’s Tigris is a drug that’s supposed to end all disease. It’s part of what has made the Nyima Corporation, run by CEO Damon Locke, a global powerhouse. The company is also behind the SEQ network, which contains information on billions of human genomes. The world’s internet and power grid were once brought down for days by a geomagnetic event, so to secure a new power source, NASA plans a mission to sister planet Kepler Z. Some sick people on Earth, however, aren’t in the SEQ system and are being turned away by SEQ-approved physicians. Concurrently, bioterrorists have released a synthetic disease that Tigris won’t cure, leading to an outbreak. Investigators with the Department of Homeland Security connect an ancient marking associated with terrorists to a symbol on Bruce’s watch, which belonged to his brother, Jack, who’s been in hiding for some time. As riots and suicides increase, government operative Henry Ford, in defiance of CIA orders, hopes to find answers by tracking down the symbol’s origin. Or perhaps Earth’s salvation lies with astronaut Tessa Jones, who reaches Kepler Z and discovers an alien species. The authors’ story succeeds at explaining its scientific terminology and seamlessly incorporating it into the narrative. Chapter titles provide definitions that double as metaphors; “Apoptosis,” for instance, is defined as the process of “programmed cell suicide,” while some characters believe that people’s suicides are part of natural human development. Most characters are ambiguous at first; a flashback of Bruce’s relationship with Jack, for instance, sheds light on both men, and more twists involving Bruce come later. The colorful panels are courtesy of LaGaipa and a team of artists, and although differences in the artwork are discernible, the characters and settings remain cohesive. A finale packed with plot turns feels like the setup for a new story rather than an open ending. It’s unquestionably rousing, but readers may anticipate a follow-up.

An intelligent, entertaining take on the possibilities of science.