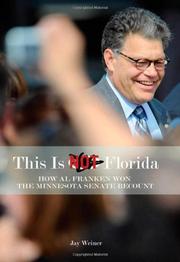 THIS IS NOT FLORIDA

Because the margin was so small—“Coleman led by a razor-thin 215 votes out of nearly three million cast”—Minnesota election law mandated a recount. The author reprises his comprehensive, on-the-spot coverage of the eight-month battle (originally written for minnpost.com), which frequently took the form of heated arguments between lawyers. When Coleman’s attorney, Roger Magnuson, contended that the Minnesota Supreme Court should “block the Canvassing Board’s decision” to count newly found absentee ballots—a position similar to the one he had argued successfully in 2000 in Bush v. Gore—he attempted to reference the Florida precedent, only to be stopped by Justice Paul H. Anderson, who “barked disdainfully…“[t]his is not Florida.” Weiner puts sports metaphors to good use in his descriptions. “Magnuson was not used to getting jabbed in the gut or cuffed on the chin,” he writes, when he received “a verbal whack from a Minnesota Supreme Court justice,” who ruled against him. Within the partisan climate of politics today, the author is convincing in his assessment that the Minnesota election was a model of fairness. Minnesota reasserted the importance of bipartisan collaboration to ensure that justice was served—e.g., Secretary of State Mark Richie created an exemplary nonpartisan Canvassing Board to determine which votes were admissible. Voting machines proved to be better than 99 percent accurate, and while some absentee ballots were misplaced or cast aside, human error, not corruption, was responsible for the errors.

Though general appeal may be limited, Weiner’s lively description of the ins and outs of the recount battle will please election junkies, political scientists and political consultants.