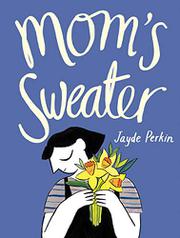 A girl struggles to understand her grief in this British import and picture-book debut for artist Perkin.

After a visit to her mother in the hospital comes a life-changing call the next morning: “She’s gone.” There’s a funeral and many condolences. The girl finds herself unable to concentrate and feels detached from the world, her father telling her that it is grief she is experiencing. Perkin writes matter-of-factly about struggling with the loss of a parent. There’s no condescension to child readers; she respects their ability to understand, telling the story with a refreshing candor from the girl’s point of view: “Everyone would say, ‘I’m so sorry.’ But it wasn’t their fault,” the girl muses. Finding one of her mother’s sweaters, which retains her mother’s scent, the girl wears it often. Her sensitive father helps her comprehend the enormity of her feelings with the use of an apt and poignant simile, explaining that her grief is like her mother’s sweater: It stays the same, but she will “eventually grow into it.” There is a fitting plaintiveness to Perkin’s stylized figures—she draws eyes simply with everyone appearing as if they are looking down—but smiles grow as times passes and the girl and her father come to understand their loss. The two are white; the family’s grieving friends include people of color and multiracial families.

A deeply felt examination of grief.