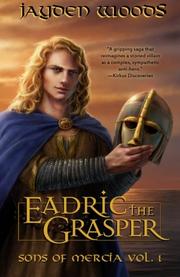 In this historical epic based on a real-life medieval rogue, a cunning young man rises through treachery—or is it statesmanship?—in an England beset by Viking invasions.

Teenage swineherd Eadric has no aim in life other than wooing scullery maids, but he has a quick wit that somehow lands him an audience with King Ethelred the Unready, and a silver tongue that thoughtlessly precipitates a massacre of troublesome Danish Viking immigrants. Eadric feels guilty, but in the year 1002 an overactive conscience doesn’t help you get ahead. Eadric does other small favors for Ethelred, such as assassinating an inconvenient nobleman who could be his uncle, and wins the sobriquet “Grasper” by using forged charters to steal land from monasteries. Soon he’s lord of all Mercia and married to the king’s ravishing daughter Aydith. Their love is strained by fresh Danish raiders, who make an almost yearly habit of slaughtering and pillaging their way through the English countryside. The ever pragmatic Eadric, who counts blood-soaked über-Viking Thorkel the Tall among his friends, favors buying off the Norsemen with Danegeld tribute—or even surrendering to the rampaging Danish prince Canute, whose ruthlessness Eadric hopes will bring stability and peace. Aydith, a spitfire patriot with a head for military strategy, seethes at her pusillanimous husband, who thinks she might be in league—or in love—with the masked English hero known as the Golden Cross. In the debut of her Sons of Mercia series, Woods tells a ripped-from-the-chronicles story—most of the characters and major events are factual—with an entertaining blend of period realism and Zorro-ish dazzle. She brings to life the violence and skullduggery of the age in exciting scenes of action and intrigue, while vividly rendering the mindsets and motives of this distant era. Her Eadric is a fascinating figure, an amoral yet sensitive man in a chaotic world, trying desperately, and not always successfully, to tame hot passions with cold calculation.

A gripping saga that reimagines a storied villain as a complex, sympathetic anti-hero.