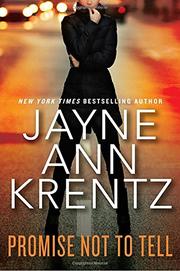 PROMISE NOT TO TELL

Two childhood survivors of a cult massacre investigate the death of another survivor and discover a trail that may finally lead them to the group's missing psychopathic leader.

When her friend and client Hannah Brewster, a reclusive artist, dies under suspicious circumstances, Seattle gallery owner Virginia Troy hires local private investigation firm Cutler, Sutter & Salinas to look into it. When Virginia was 9, Anson Salinas saved her from a burning barn after Quinton Zane, the leader of a cult compound where she was being raised, set it on fire and disappeared. Hannah was also part of the cult—a friend of Virginia’s mother, who died in the fire—as were three boys Anson ultimately fostered. Two of them, Cabot Sutter and Max Cutler, went into the PI business with Anson, so they’re the perfect firm to help her now. Hannah left behind paintings—“scenes from her worst nightmare”—which hint that Zane is still alive, despite reports to the contrary, and include some secret message Virginia can’t figure out. Soon after Cabot and Virginia begin looking into the artist’s death, a woman with no discernible link to Hannah, Virginia, or the cult winds up dead in the gallery. Following the clues leads to a local tech company and some unexpected suspects, though not to Zane. However, another close look at the paintings uncovers a trail to a lost fortune for which someone is clearly willing to kill. As Virginia and Cabot face danger and confront their shared past and its long psychological shadow, their immediate attraction grows stronger and deeper and offers them the hope of love despite their emotional wounds. Krentz continues her recent, loosely linked series (When All the Girls Have Gone, 2016) with another fascinating story and a beguiling tease regarding Book 3.

Another complex, compelling romantic suspense novel from a queen of the genre.