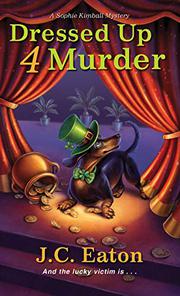 An Arizona accountant with a penchant for solving murders lands a fishy case.

Sophie "Phee" Kimball might lead a dull life if it weren’t for her mother, Harriet Plunkett, and Harriet’s neurotic Chiweenie, Streetman. As it is, Harriet lives near her daughter in Sun City West and has a wide circle of zany friends who’ve helped Phee solve several mysteries (Molded 4 Murder, 2019, etc.) while she’s been working for Williams Investigations along with her boyfriend, Marshall, a former police officer. While Phee’s visiting Harriet one day, Streetman dashes over to the neighbors’ barbecue grill and unearths a dead body under a tarp. As usual, the overwhelmed local police ask Williams Investigations to help—er, consult. Harriet’s main concern is getting costumes made for the reluctant Streetman, whom she’s entered in a series of contests starting with Halloween and progressing through Thanksgiving, Christmas/Hannukah, and St. Patrick’s Day. One of her friends is an accomplished seamstress who goes all out making gorgeous costumes that will beat an obnoxious lady who looks down on mutts. The dead man is identified as Cameron Tully, a seafood distributor, who was poisoned by the locally ubiquitous sago pine. At the first dog contest, Elaine Meschow has to be rushed to the hospital after she gets a dose of the same thing. The owner of a gourmet dog food company, Elaine is lucky enough to recover. After Streetman takes second place, Harriet’s team redoubles its efforts for the next contest while Phee and Marshall, who are moving into a new place together, continue to hunt for clues. A restaurant holdup and a scheme to use empty houses for hookups for high school kids add to the confusion.

You can’t help but chuckle over all the disasters, but in the end the heroine catches her prey.