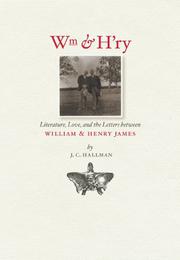 Literature, Love, and the Letters Between William & Henry James

A short critique of the letters between the famous James brothers provides an engaging footnote on the relationship and occasional rivalry between two of the finest minds of modern times.

Since academic writing is so often impenetrable, and since philosopher William admitted to being “baffled” by his novelist brother’s writing, one might fear that a study of the siblings from a university press might prove tough sledding. However, this analysis by Hallman (In Utopia, 2010) has a conversational tone that avoids cant. There’s an intimacy here as the brothers criticize each other’s work, engage in gossip and discuss their bowel problems: “Special, and playful attention was reserved for all manner of digestive failure,” as “Henry’s bowels were a perfect training ground for practicing elegant prose that described inelegant events.” Though William was barely a year older than Henry, his “letters often strike a parental tone” toward his younger brother, who “expressed disappointment that their mutual influence did not result in mutual appreciation.” Part of the tension was likely the differing arcs of their careers and influence; while William “inched his way into an academic career, he had watched as his younger brother jetted straight into the heart of the world’s literary elite.” Rather than resolving mysteries such as the sexuality of lifelong bachelor Henry, who “had better relationships with women in his fiction than in real life,” Hallman resists the conclusions to which others have jumped, while also showing that the relationship between the two brothers was closer, and their work more intertwined, than some have suggested. “I believe there exists no other epistolary commingling of minds as complete between figures that have each proven so influential,” writes Hallman.

A readable treatment of a scholarly subject.