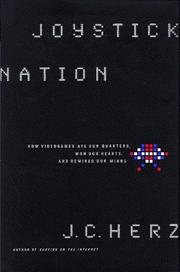 How Videogames Ate Our Quarters, Won Our Hearts, and Rewired Our Minds

Here is a look at an essential part of American youth that goes beyond a mere chronicle to engage all of the political, social, and cultural implications of video games. Herz (Surfing the Internet, 1995) eschews a historical point of view for a free-associating meditation on the video game culture that, by her calculations, has engulfed one-fifth of our population. Of course, not being able to dispense with the historical aspects of her subject entirely, Herz offers up ``A Natural History of Videogames'' timeline: The first video game was actually created in 1962 by some MIT graduate students; thus, Herz notes, ``If the history of videogames were a twenty-four-hour day, Pong would arise at 6:37 a.m.'' And in tracing the trajectory from Pong to Doom, she evokes such ``classics'' as Q*Bert, Space Invaders, and Pole Position. Equally clever is her sardonic suggestion to right-wing critics of video game violence that they turn it to their advantage with an ``Operation Rescue level of Doom, where you gun down abortion doctors'' or even a video game version of an all-out military operation. ``But, then,'' she remarks, ``been there, played that. Gulf War.'' (Anyway, she observes that in most video games, the violence is perpetrated by teenage boys and girls playing, not criminals, but law-enforcement officers.) Herz adroitly examines the gender gap in video game development, citing political feminists' scholarly critiques of Ms. Pac Man and Frogger, and her research shines in her strong study of characterization in video games, as she traces the connections between Japanese comic-book anime and the popularity of a certain Italian-American plumber named Mario. This otherwise smart and entertaining read ends a bit too abruptly during a discussion of how computer simulation approximates reality. Nevertheless, Joystick Nation will please its citizenry.