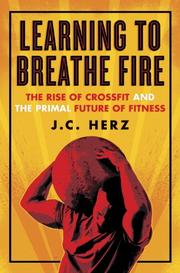 The Rise of CrossFit and the Primal Future of Fitness

The CrossFit fitness craze is based on the model of a maximum-output physical regimen of “diabolically intense” timed movements. Herz explores this exhilarating, addictive activity with equal potency, focusing on the health phenomenon’s diverse aspects, including its genesis in a Santa Cruz, California, gym and the ideals adopted by exercise guru and founder Greg Glassman. After delving into the hormonal, anaerobic and metabolic effects CrossFit can have on the human body, the author energetically presents a vast array of profiles and interviews with exercise, sports, law enforcement and military specialists—all enamored by CrossFit’s exhaustive, unisex physical demands and rational core methodology. Herz adds a dramatic flair to her prose, igniting excitement and an uptick in interest even when discussing the female names for CrossFit’s ritualistic workouts of the day or its buzzword-trendy, disciplined philosophy (“half chivalric code and half Bushido”). The author champions the yearly installations of the global, hypercompetitive CrossFit Games with brio, spotlighting the highs and lows of the competitions’ most elite challengers. Oddly, however, Herz embeds critical information on the inherent risks associated with such high-intensity physical training deep into a chapter devoted to a firefighter who successfully adopted the CrossFit approach. At times, the author’s exuberance for this trendsetting industry reads like boilerplate infomercial copy (“CrossFit HQ protects a culture that embraces competitive fitness. It’s a cult of excellence….It’s a strategy for resilience”), but as the underdog of the exercise world, CrossFit training (at least to the author) remains a “triumph of the generalist.”

A vigorously written must-read for exercise enthusiasts primed for the ultimate fitness challenge.