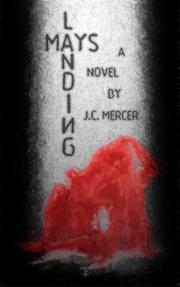 A suicidal young man decides to settle in New York’s subway tunnels with a band of vagrants.

In Mercer’s debut novel, Mays, a medical school dropout, finds himself homeless and broke after a failed suicide attempt. At the hospital, he meets Thomas “T-Bone” Bonicelli, who offers to help him escape without drawing the attention of the nurses. The two meet later at Saint Christopher All Souls Kitchen. After T-Bone finds out about Mays’ financial problems, he tells him, “We can’t have you walking around with no money like you’re some kinda bum on the street.” T-Bone earns cash by participating in “clinical trials in the pharmaceutical industry” and medical experiments. After T-Bone invites Mays to live in the “Bat Cave,” his underground home beneath the subway tunnels, Mays come to think of his new companion as a “surrogate quasi-father figure” and discovers that he has “something that had been missing for quite some time: a future.” Mays and T-Bone have their farts tested at a “clinical exercise testing facility,” become prostate exam test subjects for third-year medical students, and even sell their sperm on a weekly basis to avoid becoming destitute. Though Mercer doesn’t ever clearly state his main character’s motivations—why does he decide to trust T-Bone and go along with his schemes?—his strange tale of two men living off the grid is a fresh and vividly rendered take on the alternate lifestyle trope. Some readers may be put off by the author’s light treatment of mental illness and suicide—in one disturbing section, Mays considers all the ways he might try killing himself again—but Mercer’s goal seems to be to push boundaries past the acceptable and into the grotesque. Mays’ quest to find meaning should be familiar to those struggling to find direction in their own lives, but that may not be a good enough reason for readers to stick around for a character whose path and purpose seem to remain mysterious even to the author.

An intriguing tale of a homeless drifter hoping to reinvent his life.