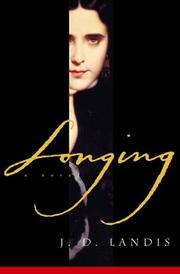 A retelling of the love story between Robert and Clara Schumann that owes less to The Barretts of Wimpole Street than to Raging Bull.

At curtain’s rise, the dying composer, committed to a mental asylum after throwing himself into the Rhine, is looking back over the ruins of his life. A survey of the facts reveals a familiar story—Romantic artist with no financial prospects woos and wins prodigiously talented bride away from autocratic father before going on to his own well-remembered success—which Landis (Lying in Bed, 1995) updates by brushing off the powdered sugar. Schumann often did behave as dissolutely as the outraged Friedrich Wieck claimed. He scattered his love broadcast, even after he’d met the nine-year-old Clara and become her father’s live-in piano pupil. And, mainly because his wife, not he, enjoyed a career as a virtuoso, he never won the public acclaim accorded his contemporaries Paganini, Chopin, Mendelssohn, or Liszt (all of whom make important appearances here) or his protégé Brahms (the obligatory third party, hopelessly but platonically in love with Clara, in any fictional treatment of the couple). Although Landis paints a harrowing picture of Schumann’s final disintegration, however, his determination to paint his musical world in such detail prevents him from ever focusing on the composer at work, or, more damagingly, from creating a convincing romance between him and Clara: He marches dutifully through each new stage of their intoxicatingly progressive intimacy without ever earning the changes he chronicles. And Landis’s incessant factual footnotes on everything from the Sacher Torte to the Third Reich, presumably intended as postmodern thumbs in the eye of Romantic biography, come across as pedestrian and sappy.

A sometimes provoking meditation on the elusiveness of genius and desire that’s also, all too often, no more illuminating than a late-night rerun of Song of Love minus Paul Henreid, Katharine Hepburn, and Robert Walker.