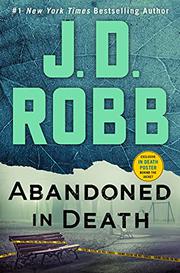 June 2061 is a perilous time for women in a downtown Manhattan neighborhood who happen to resemble a violent kidnapper’s mother.

The killer doesn’t seem to be trying to hide anything except his own identity. Ten days after snatching bartender Lauren Elder from the street as she walked home, he leaves her body, carefully dressed and made up, with even the gash in her throat meticulously stitched up and beribboned, where it’s sure to be found quickly, along with the chilling label “bad mommy.” When Lt. Eve Dallas and Detective Delia Peabody realize that Anna Hobe, a server at a nearby karaoke bar who disappeared a week ago under similar circumstances, was probably another victim of the same perp, the clock begins ticking down even before they learn that assistant marketing manager Mary Kate Covino has gone missing as well. Dallas, Peabody, and the helpers who’ve made Robb’s long-lived franchise even more distinctive than its futuristic setting race to find the women or identify their kidnapper before he reverts once again to the 5-year-old abandoned by his mother many years ago. The emphasis this time is on investigative procedure, forensics (beginning with the Party Girl perfume and the Toot Sweet moisturizer the murderer uses on the corpses of his victims), and the broader danger women in every generation face from men who just can’t grow up.

A rarity: a police procedural more deeply invested in the victims than either the killer or the police.